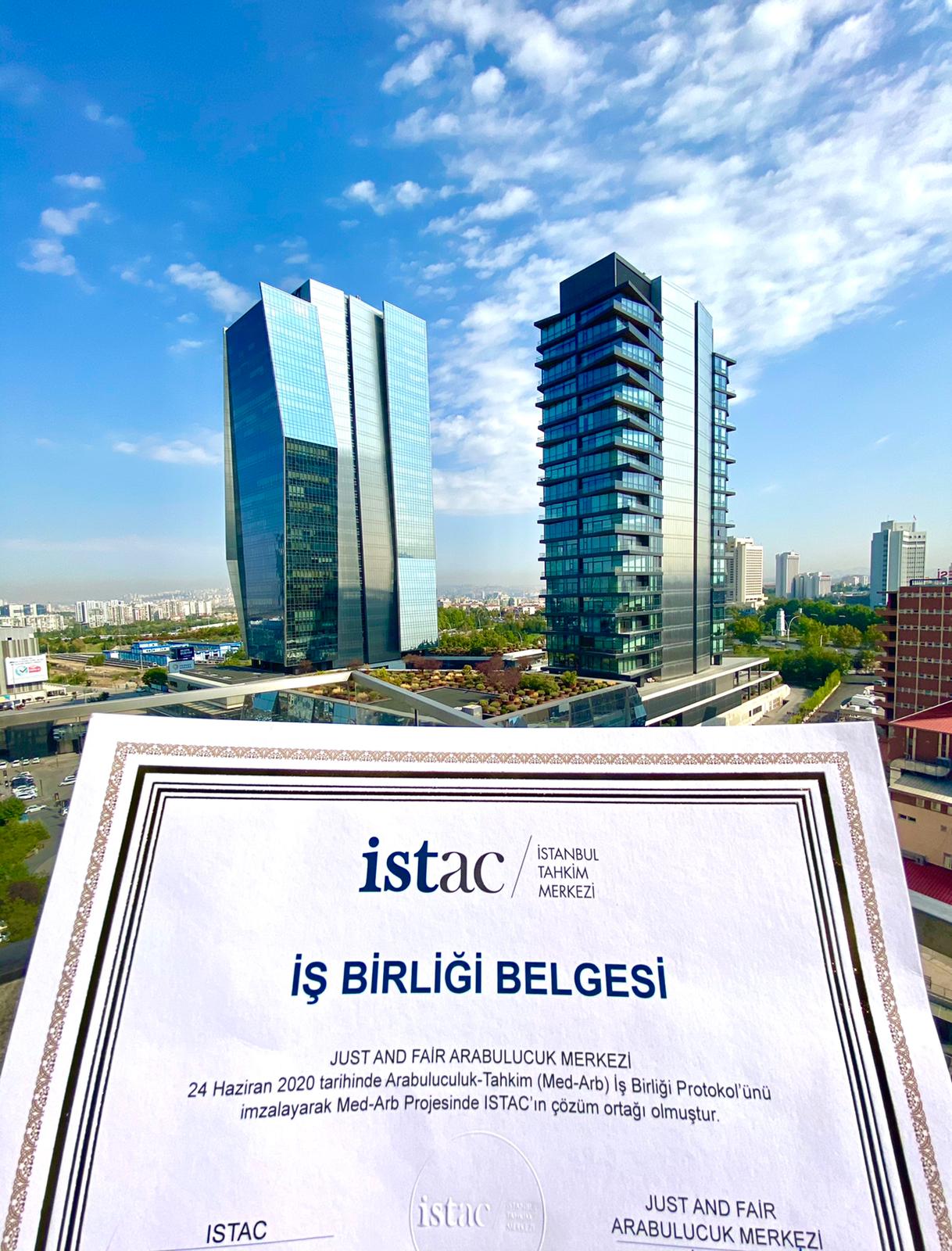 Providing the parties a neutral, flexible and confidential setting for dispute resolution on an international scale, the ISTAC constitutes an exclusive alternative for the resolution of disputes, with less expense and within the shortest amount of time possible.

Given Turkey’s key geographical location, the ISTAC shall be an international centre for the resolution of commercial disputes between European, Asian and Middle Eastern countries.

Parties wishing to refer to the ISTAC arbitration or mediation are encouraged to include an appropriate clause in their contracts.

In order to develop the arbitration culture in Turkey and provide a multifaceted support to help build up a sectoral structure in this area, a cooperation protocol between Istanbul Arbitration Center (ISTAC) and the Just & Fair Mediation Centre was signed.

With the participation of the executive board members of the both institutions, ISTAC hosted a ceremony at TOBB Tower. On behalf of ISTAC, Prof. Dr. Ziya Akıncı and on behalf of Just & Fair Prof. Dr. Vahit Bıçak signed the protocol.

Prof. Dr. Akıncı delivered a speech during the ceremony, emphasizing the importance of cooperation between institutions for the development and spreading of arbitration in Turkey. The protocol signed with the Just & Fair being one of the concrete steps taken for this goal, he stated: “ISTAC is a fairly new institution but we have gone a long way in a short period of time. Our institution is increasing its activity step by step through new case applications. We have undertaken very important steps, of which we will see the results within the next 5 years with great pride. First of these steps was to come into contact with the public sector. Thanks to the Prime Ministry Circular and the amendments in the Public Procurement Law, now the public sector is also embracing arbitration method and using it more. With all these regulations we went 20 years ahead in terms of developing arbitration and we are expecting it to increase our case number in a few years. There has also been an important support from the private sector to our institution. The Turkish Union of Chambers and Commodity Exchanges (TOBB) and its president Rıfat Hisarcıklıoğlu supported us greatly. Also our executive board members Mustafa Çıkrıkçıoğlı and Müjdat Keçeci took the arbitration to the Turkish Assembly of Exporters (TİM) and chambers of industry and commerce in order to explain and promote arbitration to the commercial decision-makers. On the other side we are also working with private Mediation Centres with those we are planning to organize arbitration trainings. With this protocol we just signed, we are now starting cooperation with private mediation centres working on mediation and arbitration as well. We find it very important that the Just & Fair considers us as a partner. As an private enterprise, Just & Fair assumes a great role in developing mediation and arbitration in our country. When Istanbul becomes an international mediation and arbitration hub and “Turkey” calls to mind a place where justice is distributed, nothing can be more precious than these, which cannot be valued with money.”

The protocol between ISTAC and Just & Fair covers many cooperation topics such as the training of arbitrators to increase their professional qualities, establishing arbitrator ethics, spreading the membership and contact networks, and appointment of arbitrators, in order to enhance the arbitration in Turkey.